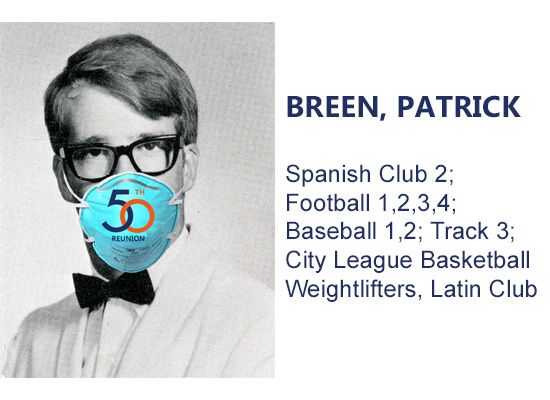 When I started my freshman year at BGHS in 1967 my brother Joe was a senior and my sister Mary was a junior. My plan was to try to meld into the crowd and be as inconspicuous as possible. Unfortunately, when each of my new teachers got to “Breen” in their roll calls, they would look up and say (out loud) “OMG, not another one!”. Little did they know I had two more siblings getting ready to torture them in the 70’s.

I thought I’d use my listing in the back of our 1970 Archive to sum up my years at Gorman. 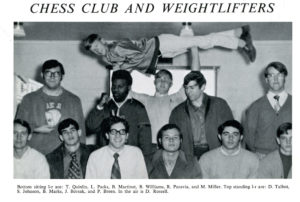 Full disclosure: ¡Ay, caramba! I can’t remember being in the Spanish Club and I’m sure I was never in the Latin Club. I did play football for four years and was forced by Ruby Basovsky to join the track team when I didn’t make the varsity baseball team my junior year. I think the Weightlifters Club had one meeting our senior year (Jim Borsack said it would look good on our college resumes). With all the trials and tribulations of my high school years I do look back on them fondly. I made some great lifelong friends and I’m glad my parents forced me to attend a small parochial high school.

Best Summer Job: Working on a line crew for Central Telephone Co. in 1969. John Geary’s dad was the president and played golf with my dad. We ran all around town putting in telephone poles and stringing up telephone cable in 110 degree heat. 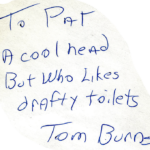 Favorite Yearbook Signature: From my freshman ’67 Archive: "To Pat, a cool head but who likes drafty toilets. Tom Burns"

Moving right along I’m guessing I’m one of the few Gorman grads that had the opportunity to marry TWO Gorman girls. The first was Sandi Murphy in 1974 and the second was Patricia Flynn in 1987. Patricia and I have two wonderful children, Kaitlyn and James. BTW, neither went to Gorman. They both attended magnet schools that worked out great for them both.

After my limited career at UNLV, I went to work at T-Bird Jewels. The owners had three jewelry stores in town, and I was the gopher. I spent most of my time delivering inventory between stores, going to the post office and waiting on customers. This is where I learned a great lesson in business. You can learn as much from doing thing the right way as you can doing things the wrong way…

As luck would have it, I soon had the opportunity, with the help from a rich uncle (seriously), to start my own jewelry store, Frontier Jewels. Lots of ups and downs, in the end I learned a lot. Mostly I learned that being the boss in a small business with a hand full of employees was not going to be my life’s work.

After a short stint working at Vegas Instant Page (remember pagers?) I went to work for MCI Telecommunications. Believe it or not John Geary’s dad, who was still the president of the phone company and still playing golf with my dad, got me an interview with their sales manager here in town.

And as they say in biographies the rest is history! It was the late 1980’s and I was in my element. The great thing about MCI was that they always had all the latest and greatest in business technology. We had MCI-Mail (pre internet email) that we would print out in the computer room every morning. We used IBM Personal Computers and dot matrix printers to print out our proposals. Part of my job was to learn about how hardware and software routed long distance calls from point a to point b. Life was good, but it was about to get better.

In 1995 MCI was the first company to launch public access to the Internet. The Internet was one of those once in a lifetime opportunities. As luck would have it, I had the chance to work on a new marketing team at MCI. Our job was to travel across the country training sales teams on this new thing called the Internet in the morning and meeting with potential customers in the afternoon. You know you’re in the middle of something special when CEO’s of major companies are calling you to see if it’s okay if they invite their management teams to your afternoon presentation.

I spent the next 20 years either selling or marketing technology devices or the networks that connect them. After I left MCI, I worked for Qwest Communications, Verizon, CenturyTel and CenturyLink.

While all this was going on our kids graduated college. My daughter Kaitlyn is a lighting designer and my son James is a mechanical engineer.

Patricia is working at Vegas PBS and has been running their website for more than 10 years.

For now, I’m “semi-retired”, I have couple of side hustles that keep me busy. One is helping with sales and marking for a company called Ready, Set Promo. We do online giveaways and instant win games. I also design and manage several WordPress websites.

I can’t wait to see everyone in October for our 50th!