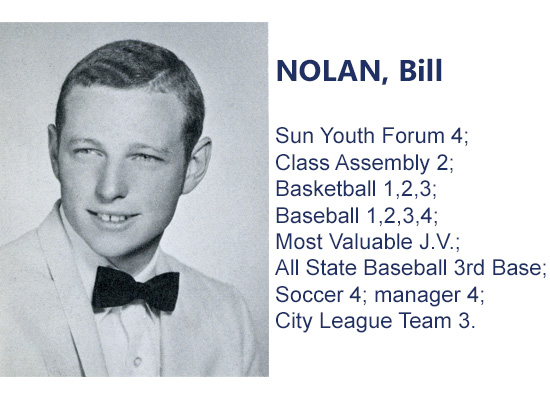 Is it possible that we graduated 50 years ago? This reunion will be a fantastic event, and I’m looking forward to seeing many old friends. 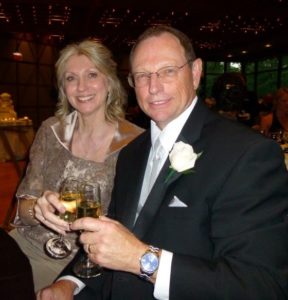 Personal: Linda and I celebrated our 43rd wedding anniversary this past May. It’s a full and rewarding journey to make a life and to share a history together.  We have one daughter, Meghan, and one granddaughter, six-year-old Grace, who brings us so much joy.  Both Meghan and her husband Andy are physicians’ assistants, and we’re grateful to have them live near us. I count my blessings; my wife has been the anchor in our family, taking care and supporting us as our careers developed.  She also puts to good use her degrees in English.  I do not leave anything I’ve written lying around the house.  Linda successfully underwent treatment for breast cancer last year, and we’re thankful for all the care she received and grateful that that chapter is behind us.

Gorman: My family moved to Las Vegas in the late 1950s.  I attended St. Ann’s along with some of you.  I was the youngest and third Nolan to attend Gorman, and I’ve always looked back on it with fond memories. I certainly appreciated the education, the friendships and always enjoyed playing sports. High school gave me that step-up into a more competitive environment that serves me to this day.  I still remember hoping I could measure up. As it turned out, I was fortunate enough to play basketball and baseball all four years and would have liked to have played football but a serious leg injury when I was 12 prevented me from tackling that sport (get it).  Once my primary growth basically stopped, I was eligible for a muscle transplant which I received at Mayo Clinic, and after a recovery period was thankful that my parents encouraged me to get back into sports. It was great being part of those sports teams, the comradery was invaluable. I worked hard to physically recover and am proud to have gone on to earn a few awards and letters and be named to the All State Baseball Team. Unfortunately, I think my letterman’s jacket and other stuff was left in the attic of my home on Palma Vista and went to the new owners. Many of the guys will remember that house: we transformed the garage into a game room with a pool table and Ping-Pong. We had some serious tournaments and poker nights in that house.

My yearbook says I was part of the Sun Youth Forum for four years, I wonder what that was? I do remember being the vice president during my sophomore year. I hope I contributed something, but that was the end of my political career.

I appreciated my teachers—except perhaps my brother Dan, whose class I was in for maybe all of two weeks before transferring to another class by mutual agreement. Something about a smoke bomb or his beloved podium being seized. I also remember having the role of the murderer in “Dial M for Murder” one year… ah, too many memories to list. 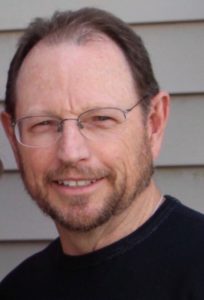 Education/Career: I earned a degree in biology at UNLV and went to work for the LVMPD in 1975 as a crime scene specialist as they were transitioning that department into a Criminalistics Lab hiring persons with a science background.  Criminal activity and the mob in Vegas in the 1970s kept me busy, and I became a court-qualified expert in major crime scene investigations. The training was extensive, and I was lucky enough to eventually graduate from the FBI “Crime Scene Investigation” academy in Quantico, VA.  In this position I was a civilian employee, so for future advancement I decided to apply to the policy academy and became a commissioned officer. Although I had intended to go back to the Crime Lab, I was assigned into patrol to gain needed street experience. From there I went into “under-cover” assignments in vice, narcotics and ultimately in SWAT.  Those were the days of Rosenthal and Spilotro, and I can confirm that many of the scenes in the 1995 move “Casino” depicted some real-life escapades with the police department.

Although I loved the work, it wasn’t necessarily a fit for family life nor were there long-term economic advantages. In 1981, I transitioned into management in the convenience store business – The Southland Corporation, aka 7-Eleven.  What a lifestyle change, in both excitement and education!  I gained operations and marketing experience in Las Vegas and ultimately accepted promotional opportunities across the country.  My first transfer was to the Philadelphia area in 2001(and had just relocated there when 9/11 happened), then to the Detroit area in 2002, and finally to the Chicago region in 2007.  After 30 years of management with 7-Eleven, I became vice president of marketing for an Indiana convenience store chain just over the state line from Illinois, and under my tenure was named the United States’ convenience store chain of the year in 2015. 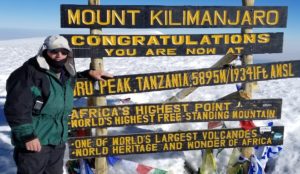 Retirement: I retired in 2018 and do a little consulting work on the side, but mostly Linda and I enjoy traveling, movies, and time with family. We’ve lived outside of the Chicago area for 12 years now and have come to enjoy the Midwest’s four seasons and Big Ten college sports, and road trips to interesting and historical places.  We plan to downsize a bit, and perhaps explore new regions—but still be close enough to family. I spend most of my days golfing, fly-fishing, and appreciating the great outdoors. Once away from the PD I took up mountain climbing. The Sierra Nevada Mountain range, Mt. Whitney, Mt. Rainier, Pikes Peak are among those that have been checked off the bucket list.  And two years ago, I climbed Mt. Kilimanjaro in Tanzania, Africa--summiting the highest free-standing mountain in the world brought me to my limits. The people, environment and culture are a must see, and I’ll never forget the experience.  We had planned a Mediterranean cruise this past March, but the COVID-19 pandemic intervened, and so we look forward to rescheduling that trip.

At this writing, we are months into ‘sheltering in place’.  I hope everyone is safe and well, and I look forward to reading many more biographies to come on this site…let us know what you all have been up to for the past 50 years!