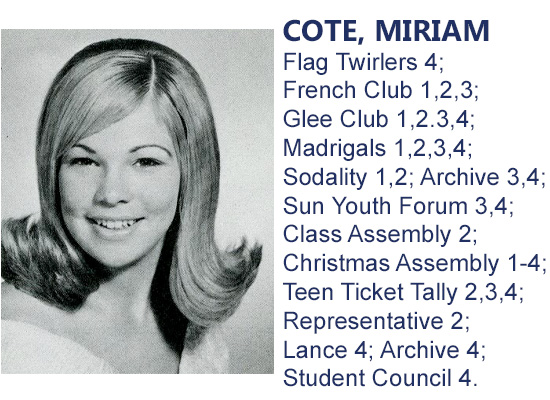 I attended St. Anne’s 2 thru 8 and moved on to Gorman.  I got a place in St. Anne’s because another student had moved to New Mexico, named Bill Nolan.  Fortunately, his family came back; I think it was in 4th grade.

Those must be some of the most memorable and at the same time forgettable times of my life.  It is funny how random things will trigger a memory of my primary and secondary education but mostly of the people with which I shared those experiences.

I left Gorman and continued my education at UNLV.  I had no idea what I wanted to be when I grew up and sometimes, I think I am still trying to decide.  I graduated with a degree in secondary education, but jobs were not plentiful, so I got a second degree in Hotel Administration.  I worked for the Tropicana and then the “new” Imperial Palace.  It was while working at the IP that I was introduced to my future husband by someone I worked with, his father.  Mark and I were married in July 1982.  We left Vegas on 11/1/1985 with baby Brittany in tow, the adventure began. 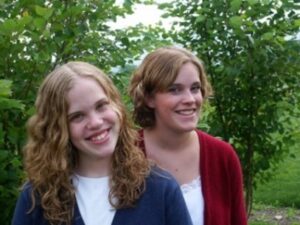 With our daughters Brittany (1985) and Caitlin (1988), we lived in almost every region of the US.  While Mark pursued his career in aerospace procurement, I found a few odd jobs myself.  In El Segundo, CA. I worked for Hughes Aircraft Space and Communications.  At Hughes, my boss took me into one of the high bays and I got to see a satellite just weeks before it was launched into orbit.  Among other memories at Hughes, during orientation, we learned what to do if a Russian spy approaches you.  I also saw my first personal computer and it had this thing called a “mouse”.

Next stop was Albuquerque, New Mexico.  My only almost offer for a hotel job went up in smoke when they figured out I wasn’t Miriam Garcia.  So, I spent some time at Honeywell in Accounts Payables.  It was in Albuquerque where Caitlin was born.

Soon, we were off to Tampa, Florida.  I went to work for Hamilton Avnet (now just Avnet) selling electronic components.  Yep.  I never saw that one coming.  It was the most stressful job I ever loved.  We left Tampa 3 days after Christmas 1995, destination, Eugene, Oregon.  While leaving a Waffle House in Alabama, Caitlin asked me if “that woman was speaking Alabamish”.

In Eugene, I had the privilege of accepting a position with Weyerhaeuser’s Springfield Mill.  I say privilege because I worked with some of the best guys on earth.  They were loggers who had “promoted” to buying, selling and nurturing forest products.  While I did accounting kind of stuff and taught them how to use a PC and do email, they taught me about the logging industry.  They would even take me out with them and showed me what they were teaching me.  Next, we went to the Seattle area, specifically Federal Way, WA where I worked for Corporate Weyerhaeuser, a totally different experience. 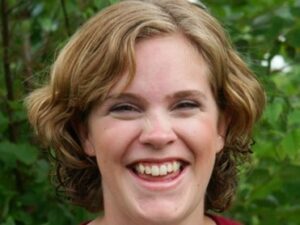 Then on to Winona, Minnesota; Binghamton, New York and Corning, New York.  We were living in Corning in on September 11, 2001, approximately 300 miles from the city and 250 miles from Somerset County, Pennsylvania.  My girls were at the high school, Mark was in Calif on business and I spent the day watching the TV and praying.  It was my birthday.  Soon, the fiber market crashed and so did Corning.  In 2003, Mark went to Mississippi to work, Brittany went to college and married in Dec 2005.  I stayed in Corning with Caitlin so she could finish high school and I could try to sell the house. 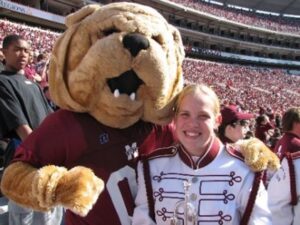 Finally, in 2006, Caitlin graduated from high school and headed to Mississippi State.  We drove to Mississippi to drop her car off at school and then continued to Lake Forest, CA where Mark had a new position.  Caitlin started marching band camp at MSU in August, preparing for football season.  I acquired a position with The Drake Group, a group of purveyors of construction materials who bonded together for better purchasing clout.  I tracked all their numbers and was their meeting planner, the closest I came to my hotel degree since college.  Fate decided we just were not to remain in California.

Next stop, Beaverton, Oregon.  Finally, in 2010, Brittany was living in Utah and expecting our first grandchild, Caitlin was graduating with a degree in music and we wanted our family back together.  Mark and I made a very bold move to take control of our own destiny.  We decided to put our family back together.  We moved to Lehi, Utah on June 1, 2010, in time to be here when our first grandchild was born on 7/21/2011.

If you got through that saga and are still reading, just image what that was like living it.

We now have three grandchildren – Maxwell Alexander (9), Andrew James (7) and Jane Amelia, who just had her 4th birthday.  We were both born in September and she adores her Gramma!  She loves Papa too but this is my story.

Hobbies?  My girls will tell you “don’t ask her”.  I started doing my genealogy in 2002.  It started because I found a newspaper clipping of an obituary from 1918, in a prayer book in my mom’s cedar chest when I was looking for my missal.  It was for William Wallace Monear.  I had no idea who he was but soon learned he is my great grandfather.  I now have a tree of 25,000 people dating back thousands of years.  I found many ancestors in the original colonies and especially in New York, where I was living when I started.  I visited the small towns where they lived and all the cemeteries. 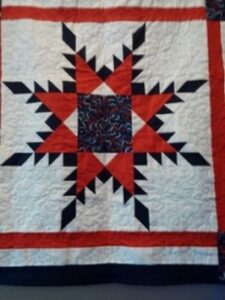 Hobby two - I love to sew.  My high school friend, Donna Mendoza taught me how to cut out a pattern when I was 14 and I am pretty much self-taught from then on.  I’ve made everything from baby clothes to Halloween costumes to prom and wedding dresses for my girls.  In 2008, I decided I wanted to make a quilt.  How hard could that be? Then Caitlin came home from college at Christmas time and asked me why the sheep in my blocks were wearing headphones, I realized it was a totally different skill that I needed.  But over the last several years I did it and I finally made a quilt this summer that I am proud of after several which will never see the light of day.  And I am combining my quilting with my genealogy.  The quilt is very patriotic - red, white and blue.  With my embroidery machine, I am making a huge label to add to the back with the names of my great grandfathers and great uncles who fought in the American Revolution.  I am planning a Civil War quilt for next summer.

So that is what occupies my time.  I feel very blessed to have the education we all received at Gorman and it was not all from books.  We had great classmates and teachers who cared.  We grew up together and those bonds last forever. 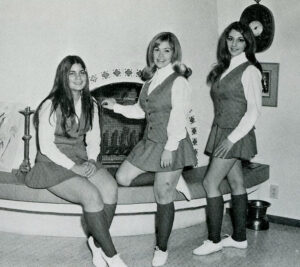 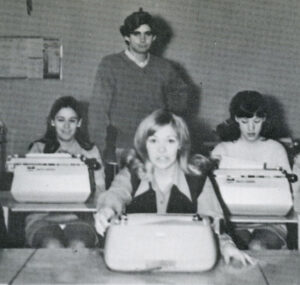